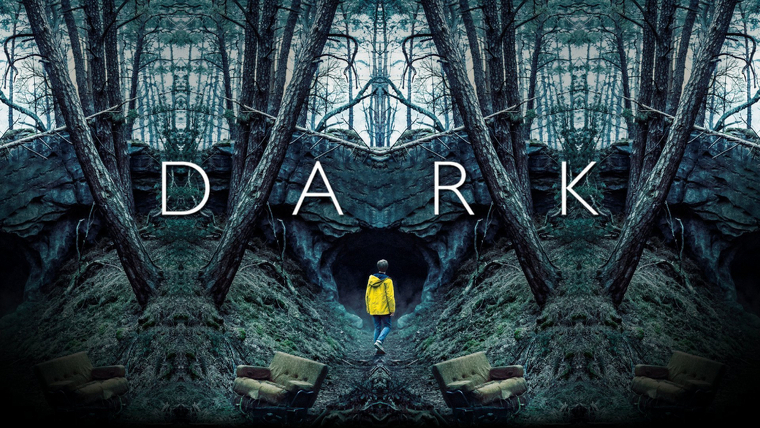 Dark is a TV show that I started watching a couple of years ago but only recently finished. One of my main motivations for watching Dark, at the outset, was the fact that it is a modern, German-language drama. I have been trying to learn German, on and off, for several years now, so the idea of watching a programme produced in that language, that might also have an entertaining story obviously appealed.

The first series begins with an introduction to the inhabitants of the small German town of Winden. Jonas, a sixth-former who attends the local high school, has been suffering from recurring nightmares ever since his father, Michael, committed suicide only two months prior. You immediately understand why the series might be called Dark.

That, however, is just the beginning. Ulrich Nielsen, a police officer, is carrying on an affair with Jonas' bereaved mother, Hannah, putting at risk what appears to be an otherwise happy home life with his wife Katerina, and their three children: Martha, Magnus and Mikkel.

The first episode ends with the high school-aged characters gathered at the caves just outside of town. Mysterious noises and electrical disturbances spook them, and to cut a long story short, Mikkel, the youngest of the Nielsen siblings loses track of the others appears to awake in 1986. At this point, it is not yet clear whether he has in fact been transported back in time or not; the fantasy elements early on are delivered with a light touch.

Is Dark going to be a Lynch-like exploration of the seedy underbelly that lurks beneath the glossy carapace of small town life? A police procedural, concerning a recent spate of disappearances? Or a German-language cousin of Stranger Things, repleat with 80s nostalgia and science fiction themes?

The answer is that, to varying degrees, Dark is all three and more. For the first series at least, the balance between those disparate elements of character and plot, with only a small number of characters congniscent of the science fiction elements of the story, while others remain wholly motivated by more down to Earth concerns, unaware of the fantastic events that are also taking place, is remarkably well judged. The first series of Dark does not have the surreal or absurd imagination of a Twin Peaks but it is very high class science fiction.

The second series expands the Dark universe in almost every imaginable dimension, with respect to both time and space. Bootstrap paradoxes* multiply, winding one on top of the other, forming what the most knowlegable characters in the show come to refer to as The Knot. That obviously means sacrificing the purity and simplicity of the first season, which actually calls to mind one of my favourite lines: “A human lives three lives. The first ends with the loss of naivety, the second with the loss of innocence and the third with the loss of life itself”. I’m not sure if that is from a poem or some other source. If it is not then that is, of course, a testament to the skill of the writers.

Another stand out line, for me was: “Gott ist zeit”. The actor delivers it with a rich resonance and being spoken in German gives it a little something extra—and that brings me to my final point: It is hard for me to know how much the language barrier helps me to overlook things that I may not forgive so easily in an English-languge drama, but I am sure that it plays a role. While the performances are universally excellent, there are moments in series two and three where I lost the thread of what was really motivating some of the characters. Contrariwise, that may have been born of watching the later seasons too fast.

For what it is worth, I would recommend Dark. I think that I may even try to watch it again, once the dust has settled. Measured alongside the extremely well-produced but ultimately rather flimsy Marvel and Star Wars TV shows that festoon the science fiction landscape, Dark fair towers over the competition.

*If you don’t already know, and you’re interested, I would recommend not looking it up until after you’ve watched the show.

Read other posts
Free and Open Source is Not Enough →